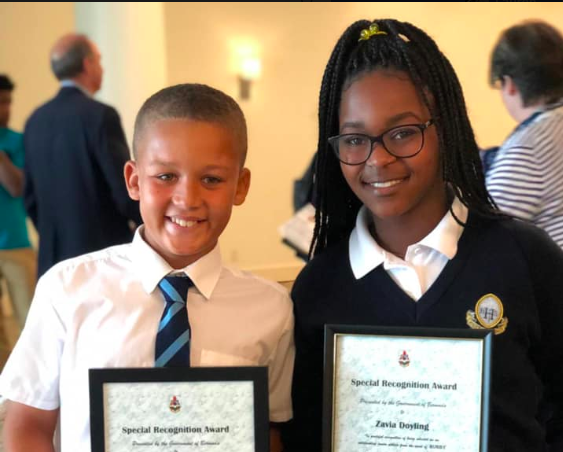 An increase to its budget enabled Government to provide sponsorship to more athletes as part of their National Junior Athlete Sponsorship Programme.

A total of 27 athletes from 16 sports and ranging in age from nine to 17, received funding to aid with their development. Norbert Simons, the director at the Department of Youth, Sport and Recreation, explained that the intention was to provide equal opportunities for male and female athletes in the same sports.

“To ensure that the women in sports are fairly represented we thought it prudent that all sports governing bodies put forward two recipients, one male and one female,” Simons said.

“The intent is to ensure that we are seen to be developing sports at all levels and for all people in the country.”

Sponsorship will go towards helping athletes attend training camps, compete overseas or even purchase a specialised road bike, as is the case of triathlete Enshé-Nico Davis, 14, who was granted $4,375 to help him pursue his dream of one day competing at the Youth Olympics.

Another triathlete, Liana De Medeiros, 14, was given a sum of $3,982 through the Bermuda Triathlon Association to purchase racing wheels and assist with airfare to participate in the 2019 Carifta Games in Jamaica.

Carifta Games pair Sancho Smith and Za’Kayza Parsons, who only returned from Cayman Islands the previous night, received funding to the tune of $3,738 each to attend the IMG Academy in Florida.

Smith is middle-distance runner and high jumper while Parsons is a sprinter and long jumper and won the bronze medal at Carifta with the under-17 relay team.

Richard Mallory III and Shelby Madeiros received funding through the Bermuda Lawn Tennis Association for $3,665 and $4,479. Both are in school overseas as they pursue their tennis dreams, with Mallory, a student at Laurel Springs School in California, planning to use the funds to compete in ITF Junior Tournaments in Guatemala and St Vincent this year.

Madeiros, who attends the IMG Academy in Florida, plans to attend the Evert Tennis Academy in Boca Raton, Florida.

The two footballers to receive assistance are Camajaé Easton-Smith and Jahni Simmons, both Bermuda youth team players at the ages of 14 and 13.

Easton-Smith received $2,405 through the Bermuda Football Association to assist with attending the FBT International Football Academy in the UK, while Simmons has been granted $3,589 to attend the IMG Sports Academy in Bradenton, Florida.

Jamar Stovell and Brianna Ray, both 15, have been granted $3,576 and $2,975 through the Bermuda Cricket Board. Stovell plans to attend the Gary Palmer Cricket Academy in the UK and Ray the Trafford Cricket Centre in England. She attends Sedbergh School in the UK and is the recipient of the Minister’s Award for cricket. Ray is one of the leading female cricketers at her school and was the captain of the Bermuda under-15 girls team last year.

Bermuda cricketer Terryn Fray, a recipient of the same sponsorship programme in 2009-2010 which enabled him to study in Cardiff, Wales, was the guest speaker at the luncheon at Hamilton Princess yesterday. He urged the recipients not to give up on their dreams and to start each day with a task, and complete that task.

“There was a young guy on my team who is now a full-time pro named Jake Libby, who was the smallest guy on the team, wasn’t the most technical and never really got a chance to shine,” , Fray recalled.

“But one thing Jake did was he was always the first to training, he always trained hard and was always the last to leave. He always asked the coach for extras, he always caught every ball and never gave up. He now plays at Nottinghamshire playing first class-cricket and has played against Delray [Rawlins].

“The moral of that story is don’t judge somebody by their size, judge them by the size of their heart. He never gave up.”

Fray said that his father, former cricketer Terry Fray “made sure every morning I left home looking the part.”

Lovitta Foggo, Minister of Labour, Community Affairs and Sport, who was in Cayman to watch the Carifta Games, praised and encouraged the young athletes who received scholarships and urged their parents, coaches and administrators to continue to support them.

“I am thrilled to be here today to recognise and celebrate our junior athletes as they prepare to embark on a journey of becoming elite athletes,” Foggo said. “I offer my heartfelt congratulations to all recipients who will be receiving an award today.

“Your talent and your commitment to your respective sports have made me extremely proud. Our junior athletes require access to a higher level of training and competition that will extend them physically and mentally, crucial for your growth as an athlete. ” 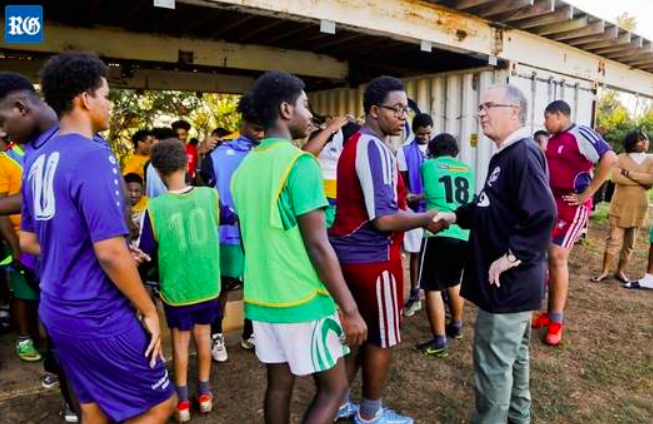 British charity donates to Beyond Rugby