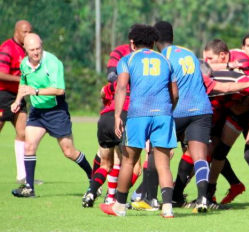 The Bermuda Rugby Football Union (‘BRFU’) announced that senior referee and referee coach, John Weale, has been selected by Rugby Americas North (“RAN”) for the upcoming Regional Men’s Under-19s and Women’s 10s Rugby tournaments, which will take place in Barbados from July 18th to the 21st.

Weale will serve as Head Referee/Referee Manager. This will be the 4th time in the past five years that Weale has been in charge of match officiating at these tournaments .

In addition, Nhlanganiso (Niso) Moyo, who has refereed in Bermuda for the past 3 seasons, has also been selected by RAN as one of the match officials for the Barbados based tournaments.

Of the recent selections Weale said, “I am gratified to be invited to continue my involvement with match-officiating in the region. These tournaments will provide me the opportunity to work with and help develop some of the up-and-coming match officials from various countries within our diverse region. This time it will include one of Bermuda’s own, Niso Moyo, which is an exciting prospect for us both.”

An obviously pleased BRFU President Sean Field-Lament enthused, “Bermuda has typically provided some of the best referees in the region. To see that tradition continue is heart-warming and a testament to the continuous local development strategy both of players and officials. Referee society chairman Nick Carbone has done a good job- with the support of RAN- to increase our capacity. The fact that two officials have been selected from Bermuda shows our capability. Weale is well respected throughout the Caribbean. This is Moyo’s first appointment at a RAN tournament and he will relish the experience.”